How important is job title when moving in-house? 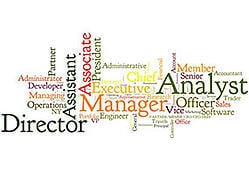 At Fry & Brown we recruit lawyers into the financial services industry and whilst many move between in-house roles, the majority are making the jump from private practice.

A major consideration for many of these lawyers is work-life balance and predictability of hours, with salary and package being the trade-off. But something that can be equally important to consider when making a move in-house is the job title – and this can often be overlooked.

Private practice titles are relatively transparent and easier to compare, with associates, senior associates, managing associates, directors, partners, and their equivalents. But in-house can be more complex and varied, especially highlighted by the diverse industries and the varying size of companies from start-ups to FTSE 100’s. In addition to the in-house legal titles there are the corporate titles, which can be especially complex at large financial institutions with matrix reporting including analysts, AVPs and VPs, EDs and MDs. The Assistant/Associate General Counsel title is particularly confusing with the position being very senior at some organisations and quite junior at others. Smaller organisations without an existing legal team might not have even considered legal titles when you get to offer stage whereas larger organisations may have so many titles that you have no idea where you should be pitched, and often the structures are not logical.

What should you read into the title, and how important is it?

Think about how you will be considered both internally and externally. You won’t enjoy working in an environment where your peers feel that lateral hires are being brought in over their heads. A “head of” title sounds great, but what are you head of? A head of a team reporting into a more senior lawyer might be better than Head of Legal as the only lawyer. And whilst you want to aim for a senior title, make sure it is going to be understood and doesn’t limit your future options. Accept that titles vary hugely in-house and are considered much more important at a US than a UK bank for instance, where what may seem like a step down could be the right move so long as it is correctly pitched within that organisation.

In truth, the right job title depends on the context, and most lawyers will have little choice anyway. But it is important that you feel comfortable that the title is accurate for the job that you are doing and the level that you are operating at.

You are applying for: How important is job title when moving in-house?